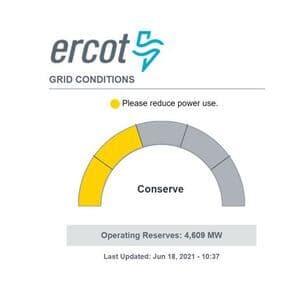 When I last wrote about the Texas power grid and its manager, ERCOT, we had just experienced a massive state-wide outage caused primarily by winter storm Uri. Consequently, the Governor replaced several members of the Texas PUC and ERCOT leadership team. The post-mortem of that event revealed a few key issues:

Fast forward to the present. This month Governor Abbott signed two bills to change regulatory leadership and develop requirements to shore up infrastructure across the grid in anticipation of future weather events. Still, it will take years to implement the solutions to increase resiliency in generation and transmission.

Last week an alert was issued after several generators went offline due to unplanned maintenance – about three times higher than expected this time of the year – at the same time as Texas set a record for June electricity consumption. Most of this generation was from thermal sources (coal, gas, nuclear). I have some friends in Dallas who experienced rolling blackouts, but it looks like steps taken to conserve energy are working (ERCOT is asking for conservation through Friday).

At this time, ERCOT has no explanation for the number of generation units offline. One possible explanation is that some are in the process of making the updates required for winterization. Some may be still recovering from the February storm. It could be bad luck. ERCOT manages future bids for power delivery and dispatch, so they should know at all times who is capable of delivering power to the grid, given a load forecast. Two comments here: the weather can ruin a good load forecast, and Texas has no reserve market. The wholesale market in Texas is “energy-only” – when you put power on the grid, you get paid for it. Capacity markets allow for the purchase of future capacity (like spinning reserves). Capacity markets add cost, but they also address the future risk (weather and unplanned outages, for example). At this time, Texas counts on “demand response” to manage events that stress grid capacity. Capacity markets are not without their own problems, as grid operators in Western Australia will tell you.

Have a question about Energy and Utilities? Email and let me know. As always, I welcome your comments and suggestions.